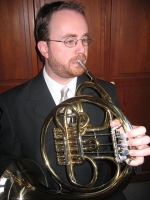 Neil Godwin is a native of Louisiana and holds degrees in horn performance and conducting from the University of Southern Mississippi. In 2001, he began studies at Boston University with Eric Ruske. In Boston, Neil has had a busy career as performer and teacher. As a new music specialist, he performs frequently with the Boston Modern Orchestra Project and the Callithumpian Consort. At the other extreme, he has explored natural horn performance with Grand Harmonie.

An enthusiastic chamber musician, Neil performs with the Boston Woodwind Society Octet and the Epic Brass Quintet. He is a member of the Plymouth Philharmonic and has played with the Discovery Ensemble, the Hillyer Festival Orchestra, the Simon Sinfonietta and the Gardner Museum Chamber Orchestra. Neil has performed with many of the region’s orchestras, including the Boston Philharmonic, the New Bedford Symphony, the Cape Cod Symphony, the Orchestra of Indian Hill, Symphony by the Sea, and the Claflin Hill Symphony. Neil is a member of the brass and ensembles faculties at the Community Music Center of Boston. He is assistant director of CMCB’s Summer Music program, where he directs the wind ensemble and coaches chamber music.